Laboratories on Raspberry Pi for CSCI 2050U

In this lab we are going to introduce the GPIO interface of the Raspberry Pi.

In one corner of the Raspberry Pi is a 40-pin expansion header. The pins are numbered from 1 to 40, with the even numbers on the outside edge of the board as shown below.

Each of these GPIO pins are identified below.

There are several different types of pins in the expansion header.

All the remaining pins are known as the General-purpose input/output (GPIO). The GPIO is a generic pin on a circuit whose behaviour, including whether it is an input or output, may be controlled by the user at run-time.

There are 4 different types of GPIO pins on the Raspberry Pi. Of these, three may be used as GPIO or special purposes.

In total there are 24 GPIO ports. Although any GPIO pins may be used, when possible the green pins should be used first.

Only the first 26 pins are used for these labs.

Using the GPIO Pins From Python

The examples below use the RPi.GPIO Python package. It comes pre-installed in Raspbian.

To use the GPIO interface from Python the first step is to import the Raspberry Pi GPIO module.

Then it is necessary to initialize the GPIO interface.

Now we are ready to start using the GPIO pins. You may declare each pin as input (GPIO.IN) or output (GPIO.OUT), define your logic, etc.

It is good practice to clean-up when you are finished using the GPIO pins. This resets all of the pins to their original state.

To set a GPIO pin to output mode from Python, you must set it to GPIO.OUT.

A light-emitting diode (LED) is a two-lead semiconductor that emits light. It resembles a simple p-n junction diode, which emits light when activated 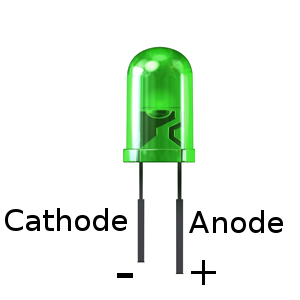 As LEDs are diodes, current only flows in one direction. Thus you must connect the anode to the power source and the cathode to the ground. Reversing these connections will not permit current to flow through and thus it will not emit light.

To control an LED from the Pi we are going to connect it to a GPIO pin. While any GPIO pin may be used, this example uses pin #12. As you can verify in the pinout diagram above, this corresponds to the GPIO #18 (as labelled in the header).

As the output voltage of the GPIO pins is +3.3V and the LED only uses +2.1V, we must add a resistor. The specification of this LED says it consumes 20mA. Each pin supplies up to 16mA, so the actual forward current consumed by the LED is 16mA, not 20mA.

To calculate the appropriate resistor value we must use Ohm’s law as follows.

With the circuit constructed, we may now control the LED with the Raspberry Pi.

Similarly to how we defined a GPIO output pin, we may define a GPIO input pin.

Notice the extra argument pull_up_down provided to the setup function. The purpose of this argument will be explained later.

In order to read a value from this pin, we use the input method. This returns either GPIO.HIGH or GPIO.LOW, depending on if the input is considered active or not.

When an input pin is considered active depends on the value passed to the pull_up_down argument. There are two possible values.

The table below further clarifies the difference between these two values. The value +1.8V is there for illustrative purposes and does not have special meaning.

The same effect could be produced by using an actual resistor before (PUD_UP) or after (PUD_DOWN) the button in the circuit, but you can also take advantage of the fact that the Raspberry Pi’s GPIO pins have pull down and pull up resistors.

Start with the circuit from Example 1. Insert a momentary pushbutton switch into the breadboard. Connect one terminal to pin #11 (which corresponds to GPIO #17) and another to +3.3V.

Your circuit should be similar to the following.

When the button is pressed, the circuit between the +3.3V pin and pin #11 is completed. This causes the input value of #11 to be GPIO.HIGH. As we want a value of GPIO.HIGH to be read when the button has been pressed, we use set the pull_up_down argument to GPIO.PUD_DOWN.

The following Python program turns on the LED when the button is pressed. The LED is turned off otherwise.

Extend the first program to make the LED blink constantly.